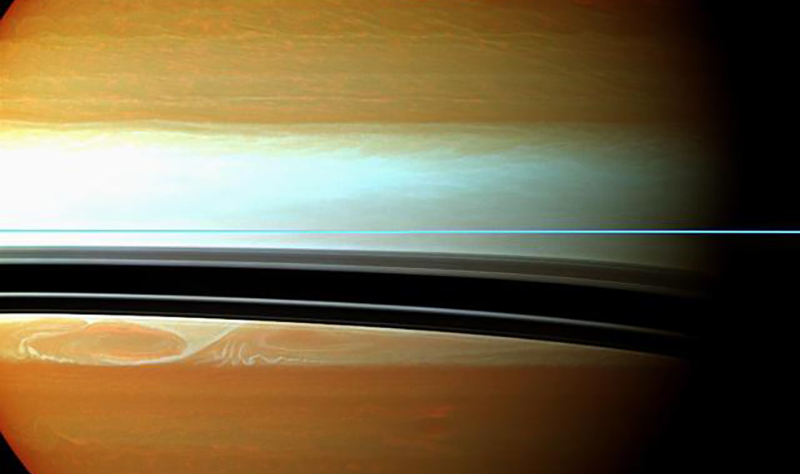 What would terraforming look like for candidates in Saturn’s orbit?

Straight from the start of this piece let’s be clear. We’re not talking about all 62 of the confirmed “moons” that are in orbit around Saturn. Instead, we’ll be focusing on the Saturn’s larger candidates that are found beyond the E-Ring. Namely; Tethys, Dione, Rhea, Titan and Iapetus.

The Composition of Saturn’s Terraforming Candidates

The moons of Saturn are relatively similar in composition. They are all made of ice (water) and rock, and have similar crust, mantle and cores. Of those listed above, Titan is by far the largest. In fact, Titan is so much larger it is larger than all of the others combined.

When we consider suitability, the moons begin to differentiate themselves. Their sizes, position, gravitational pulls, atmosphere (or lack thereof) and abundance of water, all create variable propositions.

When it comes to terraforming the moons of Saturn the process is relatively similar to that of the Galilean moons of Jupiter. A sustainable atmosphere is the first item on the agenda. This would be achieved through a great deal of heat, either through asteroid impact, thermonuclear action or orbital mirrors.

Without the radiation belt of Jupiter, the Saturn candidates would require atmospheres to undergo a process of radiolysis to create the Nitrogen-Oxygen rich environment that would sustain life. Another interesting method would be to introduce certain bacteria that would process the moons’ naturally occurring ammonia and secrete it as nitrates which could, in turn, be converted into nitrogen gas.

Paraterraforming, who needs a surface anyway?

A far more radical process would be to implement a process of paraterraforming. This process creates what is referred to as a “shell world”. The entire body is surrounded by a type of floating roof which would enclose the surface and sustain life underneath.

Underneath the roof, the Cronian moons could slowly raise their temperatures, develop water-vapor based atmospheres and, eventually, life (in the form of bacteria) could be introduced. Whilst this is a truly ambitious proposal, it does mean that the conditions could be far more easily controlled and maintained versus the extreme conditions of the unprotected surfaces.

Titan, however, is a unique case. The largest of the Cronians is special thanks to its atmosphere. It is the only large moon that scientists believe to have its own atmosphere apart from Earth’s. Furthermore, the atmospheric pressure is relatively similar to Earth’s at only 1.45 times that of Earth’s. Scientists have hypothesized that the massive sub-surface oceans could sustain microbial and extremophile life, but NASA has gone on record stating that they are definitely only “hypothetical”.

For these reasons, and the abundance of necessary elements within its composition, Titan makes for the best terraforming candidates of the Cronians.

Is it worth terraforming Saturn’s moons?

As always with terraforming, we’re faced with the question as to whether it is worth the time, effort and resources to carry out the process. The Cronian moons are attractive, in the most part, due to their resources.  There are, in no uncertain terms, enough water ice, organic molecules and resources found inside the Saturn system to keep human life in supply indefinitely.

That said, would humans look to terraform these moons before larger and closer planets? Most likely, no. But they are potential candidates, and that in itself is exciting.