At Edgeworks Entertainment, we are grateful to have the opportunity to offer our team members the ability to work from home during this important time of social distancing. We are so thankful for the support of TerraGenesis and the community that has come with it.

We’ll be creating new features and busting bugs from the comforts of our homes, as we understand how important video games can be right now. We want to make sure our players don’t experience any interruptions while practicing social distancing. Our small team is still working hard to ensure our players are taken care of in a timely fashion – we thank you for your patience during this time.

We are also committed to doing what we can to assist in the fight against COVID-19; as such, we are participating in Stanford University’s Folding@home program, a “distributed computing project for disease research that simulates protein folding, computational drug design, and other types of molecular dynamics.” We’re joining thousands of volunteers around the world by using our computers to simulate the dynamics of COVID-19 proteins to hunt for new therapeutic opportunities.

If you’d like to participate, please check out the Folding@home’s about page for more information. You’re also welcome to join under our team. When signing up, please search for TeamTerraGenesis (team 49287349) to begin folding with us.

As always, dear terraformers, we thank you so much for your dedication and support. Please be safe, play games, and terraform responsibly!

Be sure to check out our hit game, “TerraGenesis“! Available now for iOS and Android! 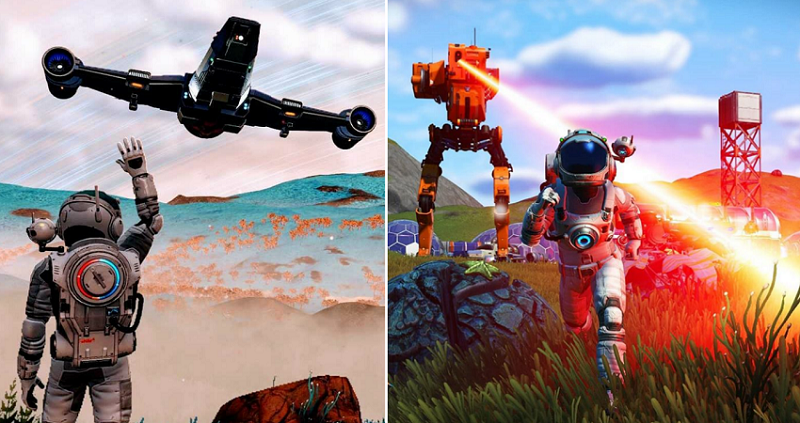 When I first got wind of “No Man’s Sky” just weeks before its release in 2016, I jumped onto the caboose of that hype train and rode those glorious tracks into 18 quintillion procedurally generated sunsets.

On release day, my coworkers picked up the highly anticipated title and decided to stream it for 24 hours straight — that’s how excited we all were for it — but by hour 2 we’d already lost interest; by hour 4 were so sick of the game we couldn’t bear to look at it anymore.

We weren’t alone — that hype train crashed and burned horrendously, but unlike a beautiful trainwreck, no one wanted to stick around and watch it. Steam had to issue countless refunds, and the game now holds the distinction of having one of the most disastrous launches in history.

We could place blame on the unfulfilled promises that lead to the overwhelming hype, such as lack of multiplayer, but a game doesn’t need such a feature to succeed if it’s good on its own. And while “No Man’s Sky”, on paper, had everything it needed to appeal to just about anybody — unique mechanic, beautiful graphics, and, of course, zooming through space discovering things — it was just missing… something.

As I watched the title struggle for two years, I promised myself that I’d give it another go when it released a multiplayer option — out of principle, of course. So when “No Man’s Sky” NEXT came out, I finally caved and bought a copy of my own, jumping back on the hype train’s newfound tracks once again. Surely, adding multiplayer and the other promised features will fix this game, right? All rights have been wronged, and we can all play in peace now, right? Right?

Booting the game up two years later, I was still met with some same critiques along with a few new ones. I’m still a random explorer with a damaged ship and space amnesia, but now I have mini-objectives that, if not fulfilled, will result in death. Each mini-objective is barely explained, and understanding the controls seems to be a privilege, not a right. Nevertheless, I persisted, and managed to get off the first planet…

…only to immediately land on a nearby moon and start another tutorial.

In a game that boasts endless exploration in the vastness of space, it’s frustrating to focus on something comparatively insignificant as my character not dying. Additionally, while discovering flora and fauna has to be my absolute favorite aspect of the game, there doesn’t seem to be much of a purpose to it besides gaining some credits. Am I furthering in-game knowledge of a certain species, or is this just for shits and giggles? And what’s up with the mining, AKA 300% of the game (with the remainder being not dying of course)?

Giving up on Story Mode, I boot up a new game on Creative instead. As I take a few snapshots of the nature that surrounds me and feed a few organisms, I’m reminded why I lost interest so quickly. I wanted to explore this procedurally generated universe, but with more purpose. I wanted to chart the stars with other players and look back on all our accomplishments on a shared map as we populated it with new worlds. I wanted to be a passive observer on some planets but actively settle others. I wanted to find flourishing alien civilizations mixed in with the lesser-evolved life forms.

Maybe that was too much to ask, but when a game promises something like infinite worlds, it’s easy to believe that the sky’s the limit when it comes to adding features.

Perhaps it’s this selling point that ends becomes one of its weaknesses. 18 quintillion planets sounds cool, but is it necessary? I keep hoping to run into another player’s base or some bustling city just by happenstance, but the universe is too impossibly big for that to be statistically plausible.

Then again, there is a beauty to the overwhelming sense of loneliness this provides. Through all the ferrite dust mined, the sentinels avoided, the flora discovered, the fauna named, the bases built and the worlds visited, I’m obstinate in my goal to not only find a connection, but find meaning. What is the purpose of building a glorious home base, only to constantly travel many light years away from it? Why am I naming all of these animals if no one else is around to take value from my discoveries? Why bother pioneering through each planet if I can’t even map them? And why is my motivation to continue to eke out an existence in this infinite universe with no clear direction?

Why is this game exactly like life? Why are we here, what is our purpose, and what keeps us going as we climb over the next hill or jet off to the next world?

As I feed carbon to a strange creature and it starts to follow me, purring, I sit down and survey my base. I take a snapshot as the now friendly alien dances around me, seemingly without a care.

Playing with the lighting controls, I settle on a welcome stillness in the air, and as the sun rises over the horizon, I’m met with the beauty that can only come from a calm morning, a planet yet to awaken after a restful night. I take a photo to immortalize this feeling of “being in the now” and post it to social media, although I know no one will feel the joy I suddenly feel from this moment.

It seems silly, but in that one fragment of time, when everything was still and I could pause to take the beauty in, I was reminded of what I felt was initially missing.

“No Man’s Sky” spoke to me in a way that only a fresh dawn can, and it healed me, if even for a little while. It reminded me to take in the beauty that is all around us and appreciate the small things that the universe throws our way. We may be lost in the desolate vastness of space, searching for meaning, but we’re always given casual prompts to stop and reflect on the beauty that is all around us.

So, to Sean Murray and the team at Hello Games, a congratulations is in order — thank you for making such a beautiful game (but let’s work on that shared in-game map, eh?).