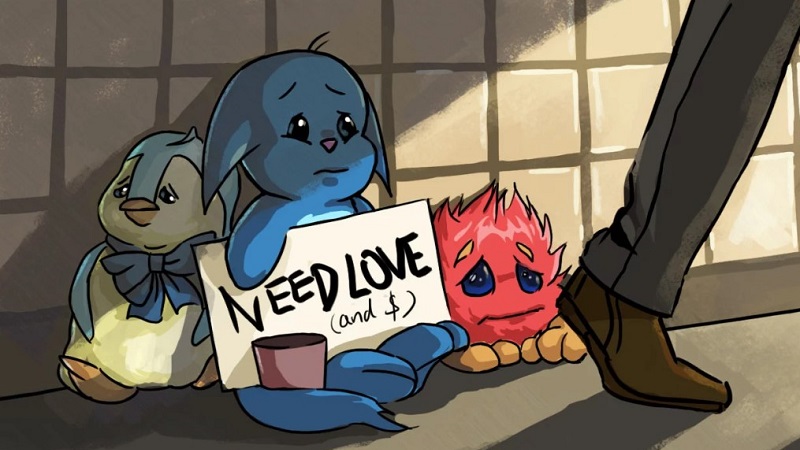 There are only two things in this world that never die — love and your Neopets (go check. I’ll wait).

Neopets was an extremely popular web-based game that allowed players to choose virtual pets, collect items, and explore the unique and interesting world of Neopia. The Neopets universe was so incredibly vast and diverse with games, shops, museums, and live events that excited a lot of investors — for a time, it was Wall Street’s darling, proving time and time again that it was the site to advertise on in order to reach young children and teenagers. The website was launched by Adam Powell and Donna Williams in late 1999 and in June 2005, Viacom bought Neopets Inc. for $160 million USD. Not bad for a free-to-play game from the ‘90s!

The point of the game was to play mini-games in order to win Neopoints, the site’s currency. Neopoints could also be earned in other ways, such as betting on events, random encounters, and through selling things in the user’s shop. These Neopoints could then be used to buy virtual goods, such as food or accessories for the Neopets to use, or they could be tucked away in the bank to save for a rainy day.

Some shop-savvy users would use these Neopoints to peruse the many shops, both officially generated by the developers and gamers alike, in order to buy items on the cheap and mark them up in their own shops to make a quick buck. There was even a feature called the “Shop Wizard” that allowed users to see the prices of the item in question so they may set it for a competitively attractive price.

On certain set dates, the Neopian shops would cut their prices in half, making these days prime shopping times. Stellar sellers would flock to the shops and grab up items that they could later resell for a profit. The items were desired, and the Neopoints were rolling in. For a while, life seemed to be pretty good in Neopia.

For example, paintbrushes (items that would paint your Neopet a different skin), which could range from 5,000 to 75,000 Neopoints, would be cut drastically in price on these special sales days. Ideally, it was meant to allow less fortunate users to enjoy some of the same perks that the more affluent Neopians enjoyed; in reality, what ended up happening is that the good deals went to a speedy few that would refresh their pages quickly and repeatedly in order to load the items before anyone else.

Eventually, a small subset of users had amassed a large amount of wealth and completely distanced themselves from the middle-class masses. These gamers would keep selling the rare items for a pretty profit, and since the site was largely unmoderated, they were allowed to continue doing this without any consequences.

What ended up happening was runaway inflation that put newer users at a disadvantage — the users that had been around awhile already had the items and pet skins that they desired, but the newer users could, in no easy way, accumulate the same level of wealth that the established users had.

Soon, earning Neopoints became less and less fun; users were no longer playing the games (unless they had a high payout) and instead were focusing on auctions, stocks, and selling items. This continued to drive inflation higher and higher until it eventually became so out of control that the game was nearly unplayable.

One popular Neopets blog commented on the matter, stating that the site became “a horrifying and disturbing look into the faults of late capitalism and the unfettered exploitation inevitable in unregulated economic systems,” that “poverty in Neopia nowadays translates to earning something around 33,000 Neopoints,” and that “wealth disparity is huge with no regulatory system helping out the lowest tier.”

“If you earn 16k a day (about average if you’re casual), it would take you 59 years to save up for a dark faerie wand,” the post also reads (the item was never designed to cost this much).

Eventually, the Neopets team came in and cleaned house in an attempt to salvage their broken economy, but the damage had been done — many users left the site, a shell of the formerly delightful time-waster it had once been.

in like second grade my friend wrote and mailed me a letter to tell me she doesnt like neopets anymore pic.twitter.com/7Fc0yJatkC

So what can we learn from this?

Regulations that have been put in place to safeguard against inflation are definitely there for a reason — and they are appreciated by the everyman. Without these safeguards, inflation would be even messier and we would certainly have a broken economy…well, more broken than it currently is. The middle class wouldn’t exist, and anyone not in the upper class would struggle for basic necessities. So, even though the state of the US economy is an absolute tornado at the moment, it’s better than Neopia ever was.

For many millenials, Neopets was their first stint into economics. This site ended up being more than just a place to gather and play video games — it became a learning experience that, only later in life, would these non-adults realize they learned. And they said video games were a waste of time!

These pets are sad 🙁 #neopets pic.twitter.com/JX8htlFAqk

Also be sure to check out our hit game, “TerraGenesis“! Available now for iOS and Android!